Happy Birthday from the Golf Gods
by  John Schneider

How many times have you missed a putt or jarred a chip and then cursed or praised the Golf Gods???  Well, today is my birthday and the Golf Gods gave me a wonderful present.

Living in Wisconsin and having a November birthday does not allow for the best birthday golf conditions; but a true golf nut will always find any possible way to get a round of golf in.  The leaves have vanished, the grass has stopped growing, and the temperature has dropped to the low 40s.  The glorious days of sun and 70s have been replaced by the upcoming long, cold winter.

Today is my birthday and I wanted to play a round of golf on “my day”.  With only 3 or 4 cars in the parking lot, I made my way for a quick round of 18 holes at my home course; Ironwood Golf Course (Sussex, WI; 262-538-9900; http://ironwoodgolfcourse.com/).  My 8 year old daughter, Grace, agreed to accompany me today.  After talking to Mike, Director of Golf, we grabbed a cart and headed out.

Ironwood Golf Course has 3 separate 9 hole courses (named Callow, Meath, and Birr) that gently move through trees and hills.  Today I played the Callow to Meath 18 hole layout.  During the prime golf season, I help manage the Ironwood Monday Night Men’s Golf League (https://firstlightsports.com/IronwoodGolfLeague.html) and play the course often.  Today, given the limited amount of daylight remaining, I took it easy and played from the white tees (68.4 rating / 120 slope) instead of the blue tees (71.5 rating / 126 slope).

This was Grace’s first time tagging along for a round of golf.  Sharing the round with her was a fun way to introduce her to the game of golf (and show her where Daddy spends too much time).  The round started out with a fairly easy, straight forward par 4 hole.  After reaching the green in regulation, I was somewhat disappointed with my 3 putt bogie.  Not a great start, however, I realized that spending time with Grace and on the golf course was great; the final score today would not matter.  Then I went on to bogie the following two holes.

My golf handicap index is in the 10.x range, so starting out 3 over par after 3 holes was not very good (however I have had worse starts in the past).  Certainly I was not expecting what was about to happen.  Over the next 15 holes I would experience many birthday gifts from the Golf Gods.

For the next 11 holes I recorded nothing but pars.  Many of the holes were played in the traditional green in regulation and two putts for par format.  However, on at least 5 occasions, I drained longer 10-15 foot putts to save par.  What made this even more unbelievable was that that the greens were recently aerated and had many annoying holes that move the golf ball in unpredictable ways.  Grace would just look at me and smile when I began laughing as the ball hit the back of the cup and dropped in.  I tried to explain to her that Daddy was simply not this good of a putter, but all she was seeing was par save after par save.  Talking about the birthday gifts from the Golf Gods seemed to confuse her even more.

Normally I would get a birdie or two when I am golfing well.  Today a birdie (or birdies) was not the birthday gift that the Golf Gods was going to give.  On 4 separate times I had putts or chips that seemed to miss the cup by a fraction of an inch.  On the hole where the par streak was broken I had a difficult downhill chip that had to be landed extremely soft.  When I hit the chip the ball landed exactly where I wanted it to and it looked like it was tracking to gently hit the pin and drop in for the birdie.  However, it moved slightly, lipped the cup, and continued 4 feet down.  To make matters worse, that was the one easy putt that I could not seem to hit… therefore, my almost birdie turned into a bogie.  Oh well, who can complain to the Golf Gods when you just hit 11 straight pars!?!?

I am not a very superstitious person, but I do know that it never helps to know my score when I am close to scoring a very good number.  There is no need for additional pressure on the last hole knowing that you need a certain score to beat 80, etc.  The only problem for me today was when I stepped on the 18th tee box it was clear what my score was (when you have 4 bogies and rest pars the score is obvious).  During the first 17 holes, I enjoyed the banter with Grace, but all of a sudden I realized that if I par the last hole I would shoot 76.  78 was my best score ever.  I have recorded 78 several times and never seem to be able to beat it.  Now was the time to get serious.

Today was my day!  It was my birthday.  The Golf Gods were looking favorably on me.  Surely today was the day for a record.  Grace, being an 8 year old girl, kept chatting away about this, that, and the other thing.  Telling myself to block everything out and just hit the drive, I went into action….only to line drive the ball into the hill some 50 yards ahead of me.  Ugh, how could the Golf Gods do this to me?  Or was it just me being me?  When we drove up to the golf ball, just short of the fairway, Grace asked why we were so far away from the green.  “It’s just Daddy playing back to his handicap”, I told her while grabbing the 4 iron to get the ball closer to the green (no shot had a chance of reaching the green).  I would have to scramble to save a par here after my third shot landed on the green about 30 or so feet to the right of the hole.  While lining up my putt, I asked the Golf Gods for one gift and then proceeded to hit the most pathetic putt of the day.  The putt was at least 10 feet short of the cup.  A pressure putt like that and I can only get it 2/3rds of the way there – wow, was I an idiot!  Well, I had to finish up so I stood over the bogie putt and hit it.  It was then that the Golf Gods provided one last birthday gift for the day.  The bogie putt went directly to the hole and hit the back of the cup like Tiger Woods just hit it.  There it was; 77!!!  My record golf score on my birthday.  Thank you, Grace, and thank you, Golf Gods. 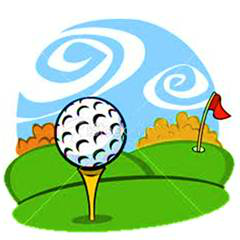